I am currently in Senegal but about to return to the U.S., after having dealt with a problem that Johnny Dondo Kante called me about this past Saturday.  An infant had been taken by hunters, and he thought she was probably from the Fongoli chimp community.  He was right, and I flew to Senegal on Monday, arriving in Kedougou on Tuesday.  For now, the ending is a happy one - we reunited Aimee with Tia.  Tia is still not 100% though, due to wounds she received from the hunters' dogs.  This National Geographic Society blog gives more detail about the story, and I'll keep you updated on it as well, when I return to the U.S. 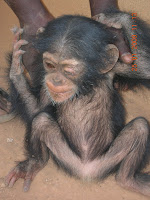 The big news this holiday season at Fongoli is that Tumbo (of National Geographic 'hunting with tools' fame) has had her first infant!!  I had just arrived in Senegal for my holiday vacation and was out following the chimps for the second day.  Tumbo has always been well-habituated for a female - as are most of the young chimps who have grown up with us - and I heard someone walking up behind me as I was sitting on the ground, collecting data on a male.  I turned and saw that it was Tumbo and turned back around so as not to rudely stare at her, given she hadn't seen me in 4 months yet was calm as usual in my presence.  As she passed by, she made her presence known by stomping just a little, as if to say "I'm coming through. Stay still.".  I wondered why she felt the need to stomp past - maybe it was because she hadn't seen me in awhile and she felt the need to assert herself...?  I looked again, as she continued and SHE HAD A TINY INFANT CLINGING TO HER BELLY!!!!  Thus, the "careful...!" message as she stomped past. It was December 23rd, and my field assistant and project manager Dondo Kante had seen her on December 3rd with no infant.  So, a December baby - yet to be named, as I can not quite make out if it is a male or a female.  She is a very good mother, holding the infant very close and supporting it each time it hangs away from her body (so I can't see the relevant parts to know whether it will be 'Cy' or 'Cynthia' - a little nod to the Iowa State University mascot, Cy).  Tumbo still travels with the males, as she has been prone to do, but then again the community here is more cohesive in general regarding male-female ranging and social patterns.  It will be interesting to see how Tumbo's behavior changes - or doesn't!  And, of course, to see if baby grows up to be a prolific hunter like his/her mom!
Posted by savannachimp at 5:25 AM No comments: